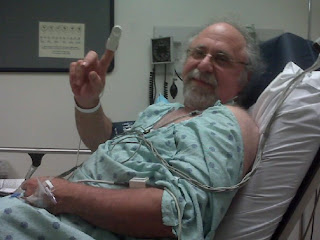 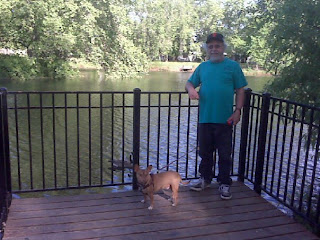 It was Friday afternoon, the day before my birthday. I was just finishing up 2 days of recording for the upcoming Stardust Cowboys' CD "That's How the Cowboys Swung the West". Flying Whale Studio is up in the hills past Colfax on the site of an old gold mine, very cool place and Bruce the engineer/owner does great work.
As I pulled out of the driveway, my left arm started cramping soon followed by my right and then a shooting ache across my chest. I kept driving, thinking maybe it was the stress of recording, too much coffee or what???? After a few minutes of it I pulled off the highway and Ryan, the drummer pulled in behind. I walked around for a few minutes and the pain seemed to subside. "Well I guess I am OK" Back on the road, within 5 minutes the pain is back twice as bad. At that point I was pulling onto the freeway, but I was getting concerned. I spotted the Weimar Park and Ride and pulled off and Ryan was right behind me. "Maybe you better make that call"(911)
After a dropped call or 2 Ryan had the paramedics on their way. They took this VERY seriously. Strapped to the gurney, with oxygen in my nose, they gave me a spray of nitroglycerin and soon I was feeling ok. They took me to Sutter Faith in Auburn. At this point I felt pretty good.(See the first picture). After an EKG, blood tests and an ultrasound the doc came in and told us (TJ came up) that everything looked ok, but SOMETHING had happened. He said I could go home but this really needed to be looked into, he would let me go if I promised to go see my doc as son as possible, but he really thought I should stay and have a stress test.
Now me, I wanted to go, we had plans to go celebrate my birthday in SF, like we usually do. He said OK but didn't look to happy. When he left to start the discharge process, TJ convinced me to stay so I was admitted. TJ told me she had bought tickets to see the Giants for my birthday. Damn!!!
So the next day I spent at Sutter they did a bunch of tests, including a chemical stress test, where they scanned my resting heart then shot me IV with a drug that made my heart race like exercise(way easier than the gym) and scanned again. I still mostly felt good, had one reoccurence of the symptoms. Tests were clean. I was still hoping to make it home for at least a bit of my birthday.
But the cardiologist Dr Birdie, wasn't satisfied. I was told that one in 12 people like me have a false negative on the heart tests and my story was so classic heart attack stuff he wanted me to go to Mercy in Sac and have a heart cath.
So another night in the hospital. Easter Sunday morning I was put in another ambulance and taken to a great cardiac hospital, Mercy, in East Sacramento. Around 11 they prepped me for surgery. I called TJ, wanted her to be there when I went in but for once things moved FASTER than expected. They wheeled me down the hall to the heart cath room. My cardiologist was Dr. Singh, a fierce looking Sikh who wore his turban as he worked on me. Don't know what drugs they gave me, but the next thing knew I heard them talking about a stent. One of my heart arteries was pretty much totally blocked, the one that supplies the back side of the heart.
Once my head cleared(matter of minutes) I had this great feeling of well being. I guess this had been building up for some time. I'd been short of breath and sort of narcoleptic a lot for the past year or more, and I guess now we know why.
So they took me back to my room with strict bed rest instructions. After a while my nurse comes in with what looked like a tire jack. It was time to take the drainage tube out from my thigh where they threaded the cath into my femoral artery. Then the nurse leaned on me with all her wait holding the incision closed for a few minutes, then they moved me to the edge of the bed and jacked me too it with the tire jack. Lots of pressure. 20 minutes of that and they took the jack away but taped a sand bag to me to keep the pressure up. All told I was flat on my back for 7 hours.
I got really great care at Mercy, pretty much everyone was really nice, supportive, skilled. They made a difficult experience not really "pleasant" but tolerable. They really care.
The next morning I met with a teaching nurse. She explained what had happened, what they did and what I needed to do. Mercy has won many awards for their heart program, deservedly.
So now, life will be different. I never expected to be a heart patient. I need to change my diet exercise more, avoid stress. Got 9 pills to take everyday, all with long lists of side effects and interactions.
So this was nothing like a near death experience, it pulled me down into my body, not out of my body, but it was a brush with mortality none the less. The staff at Mercy was so upbeat it didn't really sink in until Monday when I finally got home.
Life is precious, every second of it and the most precious thing is the love and support i got from my family and the dozens of friends who expressed their support!!! I love you more than words can tell!!!
Posted by JRL at 7:44 PM