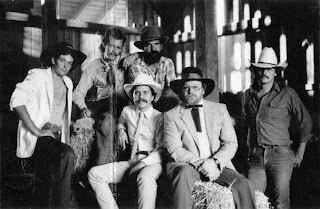 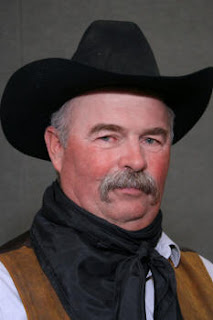 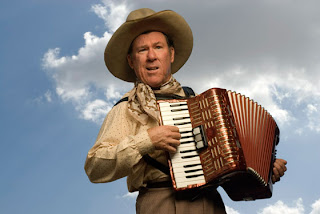 It was with some trepidation that headed to Big Bear Lake for the Cowboy Gathering to play with the Stardust Cowboys. It's long drive from Sacramento, 470 hot dusty miles.
I am in no way a cowboy, I wasn't sure how I would fit in, would Iget my ass beat for not driving a pickup truck? I was told we had a 5 o'clock sound check, left home around 9:30. At 3 I am outside of Victorville and I get a call that the sound check was moved up to 4 and how soon could I get there? So I jammed the last 80 miles got there about 4:45. Walk into the venue, sound check stalled on crappy monitors. Beautiful state of the art theater, with a former Neil Diamond rotating stage set as part of the stage(gotta love Southern California), but two Kustom semi pro monitors. Eventually we do our sound check and I check into my room. Big Bear Lake is a big time resort for people from San Bernadino and LA. It reminds me of Tahoe(the town does, not the lake) an old resort town stretched out over miles of highway.
Vicki, the band co leader hands me a shirt and scarf, retro cowboy all the way. My cowboy duds weren't cowboy enough. I head back to the venue, the Performing Arts Center and we close the show with a 45 minute set. Next day we play one set outside and one set back at the PAC.
What I found out that this is not a rodeo, didn't see one horse, it's a cowboy poetry and music festival. The attendees were poets, history buffs, lovers of legend,story tellers mixed with some real working cowboys. very nice folks, thoughtful and soulful.
One of the other performers was the great Sourdough Slim, last of the Vaudeville Cowboys. Think of a mix of WC Fields and Will Rodgers, he plays the accordian, guitar, harmonica, sings, tells stories and does rope tricks sometimes at the same time.
Another guy I enjoyed was cowboy poet Russ Knox, a working cowboy. I really like his work.
All and all it was a very fun weekend, and I hope to back there with the Stardust Cowboys again next year.
Posted by JRL at 2:26 PM No comments:


When I was young, my buddies and i would call each other and say "let's jam today", meaning lets get together and play some music with no real goal other than playing. Later on when we said "jam" it meant improvising with no predetermined structure, as in "jam band".
Later on, when I started playing clubs there were after hours jams and Sunday jams at clubs. These often attracted top area players, and the Sunday music was often way better than what happened all week.
In the past 20 years we have witnessed a whole "blues jam" culture sprouting up. From maybe 2 a week at the old Torch Club we now have 10-20 a week just locally. What is cool is that it gives players who don't play gigs a chance to play regularly, gives pro payers a chance to hang out and play with people they don't normally work with, people get to network, hone their skills.
It's also a way to get a crowd any night of the week, a well run jam will draw players and listeners who get a multi act show for usually no cover. Some nights and Sunday days there might be 4 or 5 happening in town.
Each jam seems to have its own culture, it's own set of unwritten rules. The tone is set by the hosts, each one does it a little different. Hosting a jam is not an easy task, the jammers show up with high expectations of a great musical experience. For some it is there only chance to play and they got a lot invested in it.
The challenge for the hosts is to let everyone who signs up to get a chance to play and hopefully have a good time, while keeping the show rolling a long and the quality of the music high enough so people will come to listen. We need those listeners, they fill the seats and keep the till ringing.
It's a hard job, harder than it looks and you are never gonna satisfy everyone. It's like soup: you got to have the right mix. The jammers can be demanding, they want to play at this time with these people, and sometimes it gets ugly when people don't get their way.
At it's best a blues jam is a combination of the excitement of a big revue type show, a place to learn the art of playing in musical ensembles and fellowship akin to church.
Posted by JRL at 11:15 PM No comments: 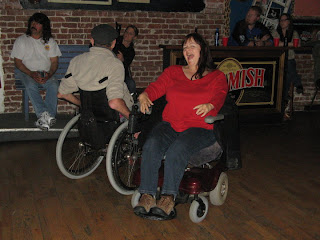 A few weeks ago my friend Kathleen McCoy Grover asked me if she could interview me for a column she writes in the Lincoln Messenger. She came down to the shop and talked to me for an hour or so, and whipped up this:
Folk music made a huge impact on Joe Lev
Behind the Bars column
Kathleen McCoy Grover Special to The News Messenger

If ever there was a musician’s musician, it would be Joe Lev.

He was born in 1952 into a family of musicians steeped in the controversial melting pot of Chicago’s folk-music community.

“My parents, Milt and Marge Lev, were part of the big folk-music scare of the late ’50s and early ’60s,” Joe said. “My mom studied guitar at the Old Town School of Folk Music in Chicago with Frank Hamilton, a replacement for Pete Seeger in the Weavers. I remember going backstage at a Frank show and seeing how entranced I was. He told my mom, ‘Get that boy a banjo.’”

His family moved to Sacramento in 1958, where his parents joined the newly formed Folk Music Society.

“My folks soon were officers. We went to concerts, workshops and hootenannies,” Joe said. “I remember my parents dressing me up in my little wool suit to hear people sing about sharecropping, gambling, drinking and women of ill repute. Sitting in the dark, I was captivated by the magic one person with a guitar, some stories and good song could weave.”

One milestone event was bringing the then blacklisted Pete Seeger to American River College. Joe may have just been 8 years old but the memories and the messages he heard made a huge impact on him.

Music surrounded Joe. His mother gave guitar lessons and classes; folk music was it for him until he was 12 when his older brother, Ben, brought home a Fender guitar and Silvertone amp.

Soon, bands were practicing in his garage every week and Joe traded his banjo for an electric guitar.

Music has been the one constant in Joe’s life, “a unifying thread, a fascination bordering on obsession.” Growing up in the north area of Sacramento near Carmichael, he and his friend, Paul Narloch, had a whole series of bands.

Just after graduating from high school, Joe and Paul were in his first “good band,” Buckwheat.

“We were Americana, 30 years too early,” Joe said. “We had a sparkle like the Flying Burrito Brothers. It was an idyllic time; I was out of school and still living with my parents. My friends lived nearby and we played a lot … just a bubble in time, hanging out with my friends, playing down by the river almost every day. We played a lot a hippie-type gigs and had a really good following.”

When he was 20, Joe met “Bongo Bob” Smith who introduced him to Oscar Robinson. Oscar ran a music school in Oak Park where Joe learned to play bass.

“I was like a musical monk, taking classes, practicing and playing for 10 hours a day for the whole year,” Joe said. “He taught me being a musician was a respectable profession. You have to be willing to do the hard work. It just depends on how much you’re willing to suffer.”

It was a new mindset for Joe and changed the path of his musical career.

Oscar put together a band called The Hustlers (1972 to 1974). “It was my debut as a bass player, which turned out to be the best decision I ever made.”

Since 1970, he has played on average 200 gigs annual in bands that cross over into nearly every genre of music.

He has been married to his best friend, visual artist T.J. Lev for 16 years. They make their home in downtown Sacramento.

He teaches at The Guitar Workshop in Sacramento and volunteers with Blues in The Schools. He played at Dillian’s Bar and Grill with Two Tone Steiney and The Cadillacs, and currently hosts two weekly Blues Jams with along with The Jokers in Rocklin and the Jimmy Collazo Band in Roseville. Joe jams with Olen Dillingham, a Lincoln resident and member of Western Swing Hall of Fame.

”The harder we rocked,” Joe said, “the more they liked it. I witnessed the magic only music can create as boomers, octogenarians and better were transported to another space and time, through the music of their youth.”

Joe is not only a musician’s musician. He embodies the best parts of the ‘quintessential unrepentant hippie’ by bringing people together to celebrate life in joy and harmonious humanity.

For more on Joe, see http://morethanatouchofgray.blogspot.com

Thank you all for checking out my random musings about my little life. Y'all must have too much time on your hands or something.
Now for my next trick I think I will continue the story of the origins of my secret identity, how I got to this place in life.
I sometimes ponder how incredibly lucky I am. Over and over I took the hand I was dealt and did my best to blow it up. So to be here with work I love and thrive on, owning a house(well the bank owns most of it) the love of a great woman, kids, grandkids and more friends than I can count I can only attribute to that old saying "angels protect fools"!!
Ah, it's good to be alive!!!!
What a long long time to be gone and a short time to be there!!
Posted by JRL at 2:31 PM 1 comment: 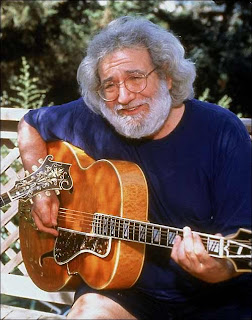 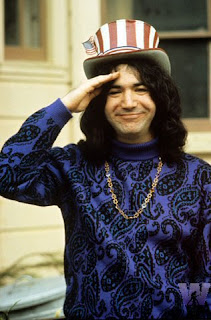 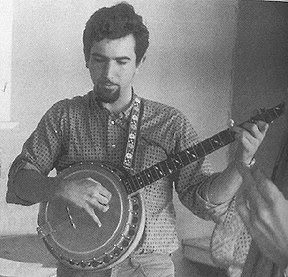