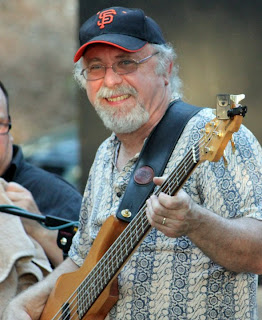 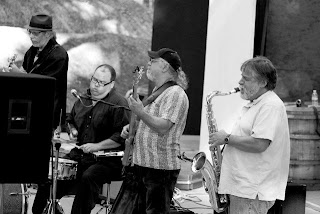 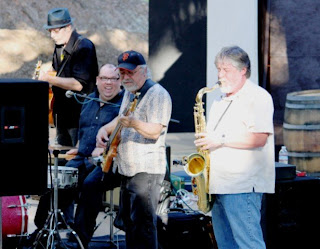 Hardly a week goes by for me without a musical peak experience or 3, isn't that what we are always going for? As the years go by it seems to happen more reliably, magic is almost taken for granted. That's the gig!!!!!!!!!
Last night was no exception. I was playing a gig for the Amador County Arts Council with The Wingnut Adams Band at this small outdoor amphitheater at the Kennedy Mine historical park in Jackson. These foothill arts council gigs always have the best vibe, people of all ages show up with their picnic dinners and an expectation of a musical good time.
The stage was in the process of being turned into a set for a production of Treasure Island. We didn't plan this but we all came out from backstage together from under what is going to be a pirate ship bridge and the people started clapping. What a great appreciative crowd they were for the next 2 hours. Wingnut thrives on a good crowd and he just had a ball. He is a true funkimeister, he certainly brings the funk out of the band(Wingnut, Paris Clayton on guitar, Barry Duncan on tenor sax and me). What he is about is groove, soul, hard work and good vibes.
Next week I will be playing the next show of the series with the Bayou Boys.
I love summer!!!
Posted by JRL at 4:40 PM